This gender reveal video, after being on YouTube for just a week, has nearly 1,500,000 views. While it's completely appalling (we'll get there), I am contributing to all the views by putting it on my blog. Forgive me. We'll tear it apart in a minute. Take a look if you haven't already.

Horrible, isn't it? I can't believe the parents did the cake thing, first of all. Second, they recorded it and put it on YouTube! Wow. Such disregard for their (only) son's feelings. It's like they are laughing at him and now letting the whole world laugh with them.

This video really hit home with me because I have one boy (the oldest) followed up with 3 girls. He was totally fine and excited to have the first sister. So excited! We had a 20-week ultrasound with baby #3 and found out she was also a girl. He was devastated and blamed me. His 4-year-old brain (and heart) couldn't understand how we had no control over the gender of the baby. Thirteen years later, he's just now gotten to the point where he is OK with this sister - who he desperately wanted to be a boy.

Fast forward to baby #4. We didn't have any ultrasounds with that baby, but we just knew it was a boy. We had tried for a boy and the pregnancy had been most like it had been with baby #1. Daymon was at the birth and found out alongside everyone else that the baby was a girl. Let me tell you, it was DEVASTATING. He cried the biggest silent teardrops ever. He was almost 9 years old and a little more mature than he had been with baby #3. We have given him full "permission" to cry over this whenever he's needed to. I will add that the morning after her birth, he was the first kid downstairs. He snuggled into our bed right next to her, looked up at me, and whispered "I love her more than anything in the world." I believe being at her birth and finding out with everyone in the room -- and being allowed to grieve -- helped him in this process. While I wasn't sad this last baby was a girl, I was very sad that my son would never have a brother.

The realization that he might never get a brother - that he so desperately wanted - was so crushing. Over the years, he's made similar statements as this boy in this video -- things like feeling so alone surrounded by all these girls. He's wanted to run away. He's spent more time out of the house, just so he could be around other boys. It's just not fair that they got sisters and a brother but he just got sisters -- and a lot of them!

The sisters in this video were so confused and visibly moved away from their brother. The dad says that he wanted it to be a boy too but doesn't really let his son grieve. The girls are crushed, and confused. To see your brother react this way to having another sister is also so sad. Both girls have got to be left feeling inferior by the brother and the dad.

I don't blame the brother at all though. We knew our son really wanted a brother, so I'm sure it was not a surprise that this boy would react the way he did. Honestly, pulling him aside, without his sisters, would have been the compassionate thing to do. No dumb cake and certainly no YouTube video.

To the boy who isn't getting a brother-
I'm so sorry your parents told you this way that you are getting sister #3. I know you are devastated to not be getting a brother. Some boys want a brother more than others. I have a boy like that and it's been sad for him. He's graduating from high school in a couple of months and is OK with it now. He's had lots of friends, boys and girls, but I sense that he is still sad about it every-now-and-then. Love your sisters. I know right now you have different interests but one day you'll have more in common. Teach them some baseball and they'll teach you some cool dance moves. I'm sorry you are in this pain. Give it time. You will grow to love your new sister. I promise. It's OK to be sad though. Make good friends. You can't choose your family but you can choose your friends.

One thing I love about Dr. William Sears, the Father of Attachment Parenting, is that he always talks about respect. Respect your children and they will respect you. I wish I was a better model of this behavior, and we do try, but it doesn't always work out. This gender reveal should never have been put out on YouTube. It was a blatant publicity stunt at the expense of their only son. Interestingly, my husband and I saw it separately (I didn't even know he had seen the video) and he was most fired up about the father talking about not wanting another girl in front of his two daughters. He commented on a post telling the dad that he's ruining his daughters' self-esteem, and even called him a jerk. Most people I've talked to about this video were totally offended by it and couldn't believe it was put on the internet. How about you?

* P.S. Dr. Sears is coming to Fort Worth April 25-27 for the Southwest Birth Roundup. There are other speakers as well, including Jill Arnold of The Unnecessarean and CesareanRates.com, Jennie Joseph, founder of The JJ Way, and Kathleen Kendall-Tacket, with several other awesome birth professionals from around Texas. Tickets are on sale now and there is limited seating. Last I heard there are still tickets left. Get yours today!

Failure to Progress and the Association with Sphincter Law

I've written a few posts on this topic over the years (The "F" Word, The Needs of a Laboring Woman Are More Easily Achieved at Home, and Welcome to the Olive Garden to name a few) but this week I received this video from Rachel Connolly Kwock, doula and filmmaker, and I just had to share it here with y'all. Check out Rachel's YouTube channel where she'll be adding more.

There are many reasons for Failure to Progress being the #1 reason for a woman having a primary c-section in the United States. "Sphincter law" is at the top of this list. Ina May Gaskin, as you know, is who coined the phrase "sphincter law" and talks about our sphincters being shy around "male surgeons". Ain't that the truth?

But, sometimes, just feeling watched in general -- even by people that have your best interests in mind -- can make it difficult to really let go and open up. Just some food for thought next time you are trying to dilate (or poop) while being watched.

Healthy Mom/Healthy Baby - Is That Really All That Matters?

I recently heard of a hospital childbirth educator playing a birth plan game where each couple was given a set of cards with various things written on it that might be important to a couple (such as dim lighting and intermittent monitoring), including 2 cards that said "Healthy Baby" and "Healthy Mother".  The couples were told they could only keep 2 of the cards.

I find this game so offensive on so many levels.

First, what parent is going to keep anything other than these 2 cards at the end of the game? This goes without saying that all parents want their baby to be healthy. What mom wants to not be healthy? Seriously. The only lesson in a game like that is that ultimately birth doesn't matter. Birth is dangerous and you do whatever you have to to just get the baby out without either of you dying.

Second, the couple's wishes don't matter. We talk about the "dead baby card" being played by some OBs, but this is a different setup altogether. This sets the stage early on to teach the couple to be obedient patients. And really, who is going to write a birth plan after playing that game in the hospital class anyway? It's a form of brainwashing, in my opinion.

Natural birth advocates have been criticized for valuing the childbirth experience more than the life of their child. Give me a break. It's a sneaky - and rude - way of making women feel bad for wanting a good birth experience. Like they are being selfish for wanting that. I was recently talking to a mom who wanted to have a natural birth but her husband thought it was unsafe and wanted her to have the epidural.  Wha?! Where do people get these ideas?! I'll tell you where - from hospital classes like the one mentioned above.

Ladies, your birth matters and you have the right to be heard. Your wishes should be respected. Educate yourself so you know if your birth does become a "healthy mom/healthy baby" situation. Don't take their word for it - know for yourself! 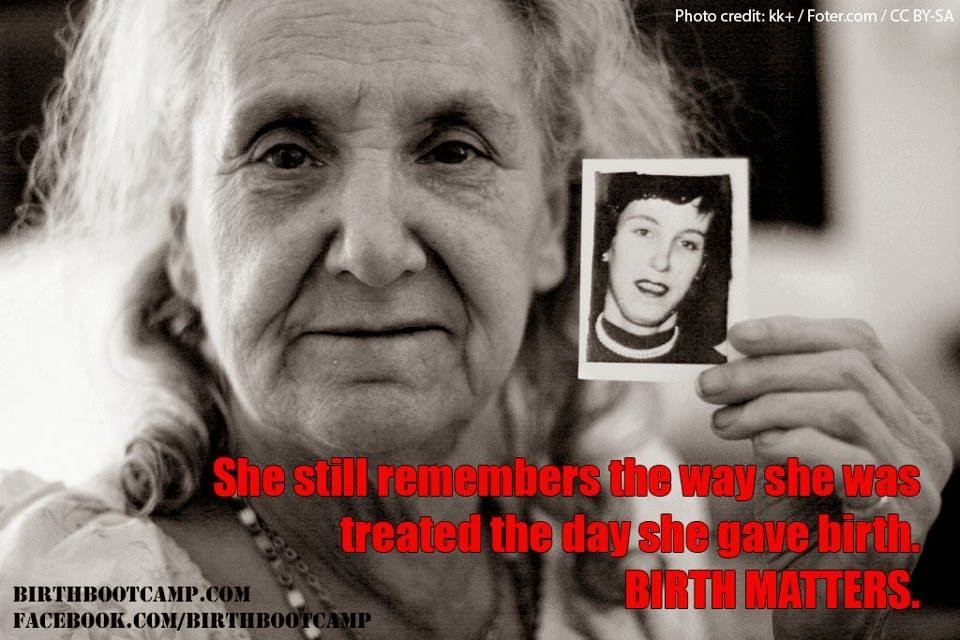 You CAN have an amazing birth (and a healthy mom and healthy baby!)! Sign up for a live Birth Boot Camp class or our online class today.