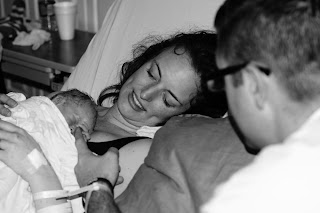 Posted by Donna Ryan at 8:00 AM No comments: 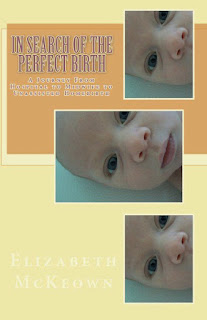 Posted by Donna Ryan at 8:00 AM No comments:

Your Doula Can't Do It For You

One of my favorite things about birth is that every birth is different.  Some are totally awesome and others just suck to get through.  It varies from person to person and from kid to kid.  If you knew exactly how each birth would go, you would just plan for that experience.  That's the thing though -- no one knows how things will go down.  I like to think that it adds to the excitement!

The costs of adding to your family can be significant.  When you are planning an unmedicated birth, making choices that will help you achieve your goals is so important.  A childbirth class and a doula do add to the costs.  Of course, if you spend time with these people, they'll tell you what you really need with a new baby, which will probably save you money in the long run!

I've seen many couples hire a doula and call it good -- thinking the doula will be their childbirth class and advocate for them.  The assumption is that she'll help them every step of the way.  While this is partially true, it puts all the pressure on the doula and none on the parents.

Many doulas give discounts to couples who take a good childbirth class and birth with care providers who are natural birth friendly.  It makes their job not only easier, but more enjoyable.  They see the parents become empowered by making their own choices.  The doula is there for support and encouragement. She provides occasional education or information about something that may have come up in labor.

To not prepare physically, mentally, and emotionally for an unmedicated birth is irresponsible.  Remember my saying - "90% of birth is in your head, 10% is what happens to you."  I really do believe that.  Not just for moms, but for dads.  He needs to have his head in the game, too!

Are you ready for labor?  Do you know your stuff?  Labor is not the time to be learning or figuring things out.  It is often difficult enough when you are completely prepared!

I am obviously a proponent of hiring a doula, no matter where you are giving birth.  It benefits mom and dad.  I never hear people say that they wish they wouldn't have hired a doula, but I certainly have heard couples say they wish they had.

Childbirth education is my passion.  For me, education was the turning point, knowing I could do it, and having the tools to make it happen.  I want to see all couples being educated and then hiring a doula to help them maneuver through labor and their individual situation.

Your labor is your experience.  The doula is there to make you more comfortable, help you meet your goals, and enhance the experience.  She can't get in your head.  She can't take on the contractions for you.  Isn't is wonderful that no one can birth your baby but you?

A corny way to end this post?  Who cares!  People are always asking me about a gift to get their doula.  There are so many choices in beautiful jewelry.  I just found this necklace and loved it.  Your doula will too. 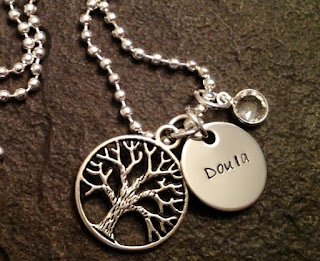 Happy birthing -- yourself -- but with a doula by your side -- and, of course, some good childbirth education behind you!
Posted by Donna Ryan at 8:00 AM 2 comments:

Political Correctness in the Birth Community

I enjoy expressing my opinion and writing this blog. The whole premise of Banned From Baby Showers is the freedom to say all the things you feel you can't elsewhere.  Maybe it's at a baby shower, a playgroup, a church meeting, or lunch with girlfriends.  It's that moment where you decide to keep your opinion (even if it's based on fact) to yourself in order to keep your friends.  Here, you don't have to do that.  Speak freely.

I honestly enjoy hearing what other people think, even when they disagree with me.  No, really.  I'm OK with it.  I've always said, as long as it's kept respectful, free of foul language and hate, speak your mind.  Of course, it's more fun when people agree with me, but it's unrealistic.  It would be boring if we all had the same opinion on everything.

My husband and I are of differently political parties.  We don't really discuss politics at home though.  When we do, our kids hear both sides, so I guess that's good.  I've had so many people tell me that it would make them crazy if their spouse were of a different political party, but I love him much more than I do politics or any opinion either of us might hold.  This week I did tell him that I was slightly disturbed that the push for the "morning after" pill doesn't bother him.  But it was one of those moments when I thought, I'm not going to change his mind by arguing with him and telling him that he's wrong.  He's not wrong for having an opinion that is different than mine.  It was respectful and the discussion was over as quickly as it started.

With that little bit of history, I had an experience this week that I found indicative of the direction society -- including the birth community --  is heading and it really bugged me.  On my BFBS Facebook page, I expressed what I thought of a picture that was floating around in my newsfeed.  It had nothing to do with the photographer, but that's how things got all twisted around.  I should mention that I never look at who takes a picture because I honestly don't care.  If I were a photographer, I might care, but I'm not.  I don't even really know what makes one picture artistically better than another.  I am clueless.  When one photographer critiques another, I don't get it.  They all look the same to me.  Full disclosure about just how clueless I really am.  But I sometimes think that pictures are interesting, sad, angry, or intensely happy.  In this case, I thought it was weird.  I jumped over to my BFBS Facebook page and said so.  I was kind of laughing and kind of shivering all at once!  Then I moved on with my day, shuttling kids around to their various activities.

I started getting texts telling me I started a riot.  Don't try to go read it - I deleted it.  It brought all the crazies out.  Here's where my problem is.  I was told my opinion was WRONG and that I was being mean.  Before that, there were a handful of comments that disagreed with me, which I was fine with. I am not going to have my words twisted around by someone who wants to take me down.  Nothing I said had come from a mean place.  That is not who I am.

This is what I see that is happening in the natural birth community:  It's offensive to say "you can have an amazing birth" because you might offend the people who struggle with infertility.  It's offensive to say "husband" because so many people aren't married or you might alienate the gay community.  To tell people that you loved your birth is a slap in the face to those that required a c-section.  The list goes on and on.  No one can share their experience because they might offend someone else.  Give me a break.

We've got one blogger who has taken it upon herself to police the other bloggers and make sure they are all politically correct and not making anyone else "feel bad".  She is telling people their opinion is WRONG.  The birth community has been brainwashed to think we have to stroke everyone's ego so their feelings aren't hurt.  Are we that fragile as women? Are we so self-centered to think everything is about us?  Honestly, no one can express an opinion EVER because you might hurt someone's feelings and said blogger will come after you.  Said blogger has bullied me and others - telling us who to "like" and not "like" on Facebook, what's "appropriate" to say and not say, and actively trying to turn others against us.  I hate bullies.  I wrote a post last year with said blogger in mind.  It's called Bullying on the Playground of Life.  For the record, I have never posted to someone else's page and told them they are wrong for having their opinions or supporting things that I do not.  It's not my place.  Banned From Baby Showers is my page.  I will not be treated this way on my own page.

Before you express your OPINION, please stop and think "Am I telling this person her opinion is wrong?  Am I respecting her right to her opinion, even if it's not politically correct or my opinion?"

The joke is that I should just write "vanilla" -- plain-Jane, non-offensive posts -- so that my words are not twisted.  Quite honestly, I'm not sure I know which those are.  I didn't think my comments this week were particularly offensive, just my simple observation and opinion.  It was in true Banned From Baby Showers form.

I am not a mean person.  I generally like people.  I would never post something malicious to pick a fight.  I just have an opinion.   I think I'm amusing.  I like a good discussion, but not so much a fight. Like you, I am very busy.  I don't have time for a pointless fight and neither do you! Facebook is the biggest time-suck on the planet. We all have children who want us to get off Facebook.  Go have a good day, and remember, everyone is entitled to an opinion, even if you don't agree.  Just because you disagree, it doesn't mean they are wrong.

I would like to keep writing this blog, but if this trend of walking on eggshells continues, writing is not fun.  I'd rather not write than have to worry who might get offended at my words that are not written with hatred.  Like I said this week, I really hate "vanilla".  Forgive me if I keep writing with a little spice.  If you hate me or what I write, you are invited to either politely disagree or step away.
Posted by Donna Ryan at 8:00 AM 12 comments: