Postpartum Sex -- Or the Lack Thereof

This is anything but a sexy post.  Let's start with the semi-sexi though:  50% of women have an increased sex drive during pregnancy.  Of course, the flip side is that 50% have a decreased sex drive.  I can usually tell which category women fall into when we have this discussion in class by the look on the dads' faces.  The sexy side is that sex is good during pregnancy for a number of reasons -- reasons that I'm not going into right now -- but then, the baby is born.  The crazy sex (for 50% of you!) comes to a screeching halt.

Your entire universe is turned upside-down by this little bundle of joy.  You now have a crying baby on your hands.  You are leaking milk everywhere, waking up in puddles.  The furthest thing from your mind is sex.  Maybe you tore and had stitches.  Maybe you've had a hard time going to the bathroom or sitting in a chair.  Things can be very tender for varying lengths of time.

Dads, on the other hand, have that 6-week postpartum check-up circled on their calendar.  You know, the one where they talk about birth control and give you the go-ahead to engage in sexual activity again.  (The significance of 6 weeks really has to do with the position of the cervix more than anything.  I didn't know that until my 4th baby.  I thought it was all about bleeding.)

News flash:  Many moms are not ready to have sex again by 6 weeks!

New moms are wired to be 100% preoccupied with their new baby, even for months.  It is so important that couples have this conversation and do not just assume that at 6 weeks she will be ready.  I never tore with any of my babies and the first time having sex after giving birth was always pretty intense.  I'll be the first to admit, I was not into it at all, but felt bad for my husband.  It was guilt sex.

Physical obstacles include leaky breasts (some men like this and others are really turned off by it) and vaginal dryness.  Breastfeeding contributes to the dryness, but I've never been comfortable "blaming" breastfeeding.  As you know, sex for a woman is as much about what's going on in her head as it is what is happening physically.  Like I said, she is 100% preoccupied with the baby.  A lot of women find it hard at this point of motherhood to feel like the sexual being they were previously. There can be some emotions to work through and adjust to, and sometimes this can take months. 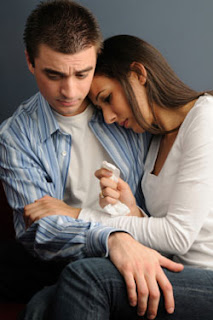 Depending on what baby number this is, she may be "touched" all day long by various numbers of children.  Nursing, holding, changing, consoling.  At the end of the day, she may just want to be left alone.  This is so hard for a relationship.  I've seen lots of moms (and dads) go through this.  I know, when David and I have frequent sex, our relationship rocks!  When we go long periods of time without it, we fight and get annoyed with each other.  He'd be thrilled to know that I'm writing about this!  I have no doubt that every relationship is the same way.  Going months without sex is hard on a relationship.

I have not gone through this personally, but I know plenty of people who have.  It's been very trying and every mom I know feels terribly guilty.  In every case I know of, the mom tore pretty bad and was stitched.  They all felt that the stitches were too "tight" and not quite right.  All of them were embarrassed to talk about it and felt that what they were going through was very rare.  That's really why I wanted to write a post about it.  It should be talked about and women need to know that they are not alone.  Communication and compassion are crucial in a marital relationship enduring this trial.

Over the years, I've heard a few dads comment that they feel like they've been replaced by the baby.  This, too, is short-lived, trust me!  Every day I feel like it's me and David against these 4 crazy kids!

A good friend of mine gave me a silly book several years ago called The Diaper Diaries: The Real Poop on a New Mom's First Year.  Normally, I really hate books like this, but this one is really pretty funny and I'm pretty sure I've laughed out loud at several of the pages.  I have often referred to this "chart" of a typical 20-year scenario with a child.  It's divided by years of motherhood-- what the baby does and what the husband does in that year.  I hope you enjoy it.

Smiles every time he sees you and cries when you leave the room.  Says his first word:  "Mama."
Wants to breastfeed like the baby.  Changing diapers makes him sick to his stomach.

2nd Year:
Loves to sit on your lap and read Are You My Mother?
Baby bumps his head when husband is supposed to be watching him.
3rd Year:
Wants to marry you when he grows up.
Teaches baby Three Stooges eye poke.

4th Year:
Has developed bad habit of wiping his nose on your pants.
Wants to cuddle with you after you've had a bad day.

5th Year:
Insists on wearing Spiderman outfit to kindergarten every day.
Will listen to you complain about your boss every night.

6th Year:
Won't let you kiss him at the bus stop.
Expands cooking skills beyond "grilling" so he can make dinner the other 10 months of the year.

7th Year:
Begs for (and gets) puppy.
Will gladly turn off the baseball game to make out with you.

8th Year:
Is tired of puppy (now dog).  Will only talk about baseball.
Takes over puppy duties.

9th Year:
Thinks girls, homework, and vegetables are all stupid.
Watches Sex and the City with you.

10th Year:
Loses an average of one sweatshirt and one pair of sneakers every week.
Occasionally leaves sticky love notes for you on the bathroom mirror.

11th Year:
Will only talk about soccer.
Is willing to spend his whole vacation with your parents.

12th Year:
Thinks his friends are cool and you are dorky.
Worries about you when you have to drive in bad weather.

13th Year:
Won't leave his room because he has pimples.
Still thinks you're hot, especially when you wear your cut-offs.

14th Year:
Drives friend's motorbike through high school cafeteria on a dare.
Washes and vacuums out your car when you are harried.

15th Year:
Allows motorbike friend to tattoo rattlesnake on his ankle.
Encourages you to go back to school to get your Master's.

16th Year:
Wants to quit school to become a magician's apprentice.
Buys you a sexy sports car for your birthday.

17th Year:
Needs to borrow $4500 for a "once-in-a-lifetime-opportunity."
Reads the same novel you are reading for Book Club so he can discuss it with you.

18th Year:
Stops by the house just to shower and change.
Rearranges his work schedule so he can cheer you on in the tennis final at the club.

19th Year:
Wants to move in with girlfriend who is 4 years older than he is.
Waits up for you after your Investment Club meetings.

20th Year:
Wants to move back home with girlfriend because magician gig isn't panning out.
On your 20th anniversary, he says he'd marry you all over again.

Sometimes a bigger perspective is helpful.  Talk to each other.  Communicate.  If the bottle of lotion has to sit on the nightstand a little longer, so be it.  In a lot of cases, time changes situations if you can both be patient.
Posted by Donna Ryan at 6:30 AM

Thank you for this. I personally did go through a lack of sex postpartum.

My story:
My rough hospital induction resulted in an even rougher recovery than we anticipated. I had already been diagnosed with a medical condition that made sex painful. Then after labor/delivery and my body trying to reject the sutures used on my episiotomy our 'six week wait' turned into seven and a half months that involved five silver nitrate treatments and five months of physical therapy (all on my vagina).
Thankfully my husband was pretty understanding. Not that we didn't have our rough patches though. Sometimes we still have issues with intercourse hurting me but we're working through it together. It's been a struggle for our entire marriage and postpartum was no exception.

sex after my hospital delivery was still painful after 3 months - sex after homebirth - two weeks and wonderful... food for thought for those of you trying to talk husband into homebirth ... LOL

Six weeks?!? Oh my goodness, I can't imagine waiting that long! (But I've never had a hospital birth so I can't relate to that kind of pain.)

With my second (first vaginal delivery, a complicated mid-forceps rotation) sex hurt for six months. I had TWO nursing babies (infant and toddler) and sex was the last thing on my mind. I was never without someone on my tit at night; husband really had no chance to get near me. This caused a long baby spacing; #2 and #3 were 26 months apart. After #3, a normal delivery, we had sex before my TWO week checkup, and while I wasn't quite ready to be thrilled by it, I was willing and not in pain. There have been times when we waited only a few days after a birth.
My husband only told me a few years ago how difficult that time after the second one was for him. I just didn't seem to have time to think about it then.
Susan Peterson