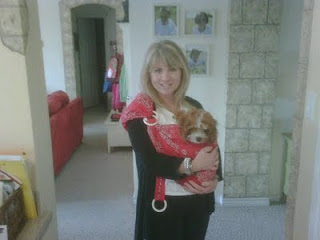 Meet my new baby, Annie.  She's a red-headed cockapoo.  She's almost 5 months old.  So far, she's been a fun addition to our family.  I'm so happy to have a baby in the sling again!  She loves it and will stay there for a long time.  She likes to be held and has gotten so much attention in our family.  She's been very social and content to let anyone pick her up and carry her around.

We had a couple of dogs growing up, but they were outdoor dogs and had rotten behavior.  They weren't allowed to really be a part of the family.  I have never considered myself an animal person -- still don't -- but I am rather enjoying this dog.  I wanted an indoor dog because I think they are typically better behaved.  Plus, we have a pool and not a great backyard for a dog.  I am also grossed out by the fur of an animal that lives outside most of the time, tracking it in the house.

My sister doesn't have any children, and I remember when she held Darcy as a new baby, she was stiff as a board.  She held her arms straight out, totally awkward.  The baby didn't mold to her body.  It was painful to watch!  She had no idea what to do with a baby!  That is how I feel with a puppy.  I have no idea what to do or how to train it.  We got the dog on "class night" and I was asking several couples about different things with the puppy.  Over the course of the week, I have gotten more advice on how to train a puppy!

The conclusion I've come to is that people parent their babies like they do a puppy.  Some of the advice I've gotten this week in regards to the puppy reminds me of things I've heard about parenting a baby.

*Don't let her sleep in your bed.  It disrupts the pack order.
*Don't let her manipulate you.
*Don't get her out of her crate if she is crying or barking.  She'll eventually like being there.
*She needs to know who is her master.  If she misbehaves, put her on her back and hold her chest until she   stops moving and fighting you.  You want her to be submissive.
*If she pees in the house, put her nose in it and "spank" her, telling her "no!"  Take her outside.
*If she doesn't pee when she is let out of her crate, put her back in and try again in a few minutes.  Keep putting her in the crate until she pees.
*If she doesn't poop where you want her to, move the poop and keep showing her where to go.
As a non-dog owner up until now, I can safely say that I've seen people treat their animals like their babies or children.  They talk about them like they are their children.  When people are actually talking about their children, they will pipe in about their dog(s).  I've even thought someone was talking about their child one time and was shocked to find that they were referring to their dog.  I've always found this strange, and kind of annoying, to be perfectly honest.
To hear all this advice this week, it's made me think, it's no wonder people parent the way they do!  They have dogs and then along comes a baby and they think it's the same thing!  They don't want to disrupt pack order and won't let the baby sleep in their bed.  They put the baby in their crib (ie. crate), not letting the baby manipulate them by crying and trying to get you to come get them.  "Eventually they will like being there."  I just couldn't stop thinking of all the cry-it-out methods of "sleep training."
I see people swat toddlers hands or bottoms telling them "no!" and then putting them in time out, just like a puppy that peed on the carpet.  We want our children to be independent, but submissive, knowing who is their "master."
Babies are not like puppies.  There may be similarities in behavior, but the way to deal with them is not the same!  Human babies have the need to be with their mama continuously.  You are your baby's environment (a quote from lactation consultant, Mellanie Sheppard) and they require that constant contact.  A baby cannot manipulate you.  Period.  You will have more confident, independent children if their needs are met by a parent that they trust.  If their needs (physical, mental, and especially emotional) are not met, you will have a misbehaved child.  My 14-year-old is capable of manipulation now, but he was not as a baby, or even as a toddler!
I am not arguing with how to train a dog -- what do I know?! -- but so many things I've heard reminded me of things I've heard people say about parenting their babies.
*Don't let them sleep in your bed.  They'll never leave.
*They have to learn to fall asleep on their own.  It's OK to let them cry.
*Don't let them manipulate you by picking them up or holding them all the time.
*Teach them independence.  They need to teach themselves how to fall asleep on their own.
*Swatting and spanking teach them to respect their elders and also right from wrong.
*If they don't behave, put them in time out until they learn.
Love on your baby.  Carry her in a sling as often as possible.  Breastfeed her continuously.  Watch her grow and thrive.  Allow her to sleep next to you and breastfeed throughout the night.  You will have a well-behaved baby, toddler, child.  Their needs are met, they feel loved, they trust you.  They will know that you value them as a human being.  You will have a mutual respect for one another, from one person to another.
I guess knowing what I know about about babies has made me wonder about all the advice I've gotten this week about the puppy.  When new parents are given this advice about their baby, they believe it.  They follow it, even if it doesn't feel right to them.  My girls, and my husband for-that-matter, have not liked some of the advice we've gotten.  They think it seems mean.  Are they following their instincts?  Should we listen to that, or will we have an ill-behaved dog as a result?  We certainly don't want that!  So, we follow the advice by people who have dogs already, just as new parents follow advice by people who already have children.  That, as we know, is not always the best idea! 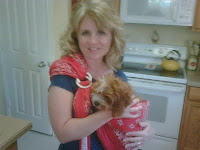 As we try to get to know Annie, we are finding that she has her own little personality.  I guess we'll take bits and pieces of advice we've received, and throw the rest out that doesn't feel right.  We may create our own little hellion in the process and we'll have no one to blame but ourselves. I can't help but think that love and tenderness cannot be a bad thing in raising a baby of any variety.  I hope I'm right on this one!
Posted by Donna Ryan at 5:00 AM

Ummm yeah, as a semiprofessional dog person (I did run a professional dog training organization) and a mom of 2 including a teenager, I will say that I don't agree with lots of the advice you were given about dogs or babies. Some of it I do (and I think some of it I offered) although scientific minutia about pack order is probably out of context for a cockapoo unless she starts terrorizing people. Rubbing noses in pee only serves to traumatize your dog on a topic she doesn't understand. Of course, I know people who spank when a child is potty training, so I guess I can see where some think that's ok.

If you want to train her to do stuff, use clicker methods from Karen Pryor - this is also a great way for kids to teach http://www.clickertraining.com

Stay as far away from petsmart and petco classes as possible (okay they aren't that bad- but there is a consistency issue from store to store). And if you screw her up, I'll help you fix her. :-)

There's some more advice to add to the mix. Like parenting, you CAN use all positive methods when training a dog. They are not always as fast as using fear and abandonment, but I think DO have a better longterm outcome. She's super cute!

Agreed with Shannon! I was a vet tech in my "previous life" haha! I do think there are some parallels between ECing and puppys though, like "catching" your puppy's signals when they have to pee, before they actually pee ( circling, sniffing the ground, stopping their play abruptly), just like your baby ( a far off look, thrashing around, etc.). But the whole rubbing the pups nose in the pee is very old advice, they think, "what the heck does this mean!?" :) This is what we recommend: hang a bell on a string on your back door and every time you take puppy out to potty you ring it and say "potty!" Pretty soon, the pup will learn to ring it. Even if she seems like she accidentally runs into it, take her out to potty. Sounds weird but it works! She's adorable, good luck! :)

just wish you had rescued a dog rather than a gourmet breed.

I recommend Cesar Milan's books and information for the puppy. He really helped us train ours...she's a good dog!

As far as babies, I agree with you about everything. Hold them, love them, nurse them, don't let them cry! :)

@Janie - this actually WAS a rehome! The previous owners had to give her up.

Love your comments regarding children.It's amazing how many people actually believe that at tiny baby is capable of manipulation!

Ha! Our dog totally slept in our bed, poor guy got the boot when Ash was born!

She's a cute little pup, and I completely agree with the clicker method, worked really well for us. Our dog never has an accident and is all around wonderful. Just wish he didn't make my job so difficult by shedding all over the place. Enjoy your new little "addition."