Another Product I Love 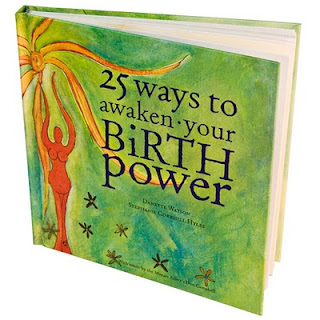 I recently came upon a book titled "25 Ways To Awaken Your Birth Power" and love it. Love it for several reasons. First off, the artwork is beautiful and inspiring. So much so that I ordered one of the prints for my Bradley bathroom that my students use. The quote is mine. 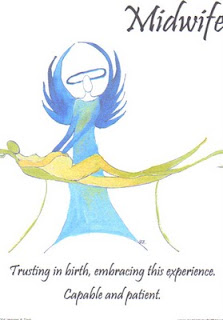 The book comes with a CD of all 25 exercises, read in a soothing Australian accent with pleasant music in the background. Your partner can read it or you can use the CD. I would recommend both.

I love the name of the book. The word "awaken" is what strikes a cord with me. All women have this instinct to give birth, to breastfeed their babies, to nurture their young. Most women, however, do not even know their capabilities. Fear of birth surrounds us in all that we see and hear. Some women know they can give birth naturally, but most, I believe, need to awaken their birth power.

And how about the words "birth power" -- that's what it is -- power. Power from her body, of course, but even more, power from her mind, her heart, her baby, her partner, her doula, her midwife. She becomes more powerful than she ever thought possible during the act of birthing her baby. This power carries her through everything that comes afterward in her life. She will reflect upon the things that she learns about herself during birth throughout her lifetime. Her power and the power that birth gave to her.

If you would like more info on how you can order your own copy, check out www.awakenyourbirthpower.com. Enjoy.
Posted by Donna Ryan at 10:06 PM 1 comment: Links to this post

"Scars remind us where we've been, but don't have to dictate where we're going."
-Agent Rossey, Criminal Minds

OK, a bit strange to put a quote on here from Criminal Minds (my favorite show on television), but seems very applicable right about now. Stay tuned for a wonderful VBAC story...
Posted by Donna Ryan at 9:17 PM 2 comments: Links to this post

Another Petition to the AAP Protesting Circumcision

This petition goes to the American Academy of Pediatrics about NOT recommending circumcision to all baby boys. Their stand for years has been to leave it alone, but they are considering changing it because of these reports out of Africa which I've been writing about.

The last petition was for the CDC. This is a different petition.
Posted by Donna Ryan at 2:48 PM No comments: Links to this post

I have an unfortunate story to tell. Not the best line to start a post, but here goes:

Last spring I met a woman, Allison, at church who was pregnant with her third baby. She had had two previous c-sections and was going to have another because her doctor wouldn't do a VBAC (Vaginal Birth After Cesarean) after two c-sections. I told her that there were a handful of care providers who would do a VBAC for her in the area. I sent her some different names, links, and videos to check out. I was starting up a new class around that time and her and her husband, Jonathan, enrolled.

They started their "homework" immediately. They began interviewing midwives and other doctors. They hired a doula. She visited a chiropractor regularly. And Allison read like crazy. She became very informed. She truly prepared her body both mentally and physically for a VBAC.

They hired a doctor at a hospital that says they "allow" VBACs. The doctor admitted that not everyone in his practice would do it, but he would do his best to "protect" her. In the past, he has been at the births for my students and even encouraged them to eat, drink, and walk around. They felt good about their choice of doctor and comfortable with the hospital.

Her "due date" came and went, but they waited patiently for another 8 days. She visited with Hannah who worked on some acupressure points, took an herbal supplement from her chiropractor (said to put a woman in labor within a day or two), and she was in labor by the next day!

I was in contact with their doula, Nancy, throughout the evening. When they got to the hospital, Allison was dilated to about a 3 or 4 and 90% effaced. She had never really started labor on her own before, so this was so exciting! The doctor on call said that her doctor was not available and could not be reached, and after reviewing her chart, would not do a VBAC. Allison told her that she would not have a c-section at that point because everything was going fine. The doctor told her that she would either have a c-section "right now" or Allison would have to fire her. So, Allison fired the on-call doctor!

From that point, the doctor treated her very poorly and would not let her have the things she wanted, like a birth ball. The nurses were trying to help her, but the doctor made that nearly impossible. With all the questions, and needles, and stress, adrenaline took over, which is the opposite of oxytocin. Her contractions spaced out and got much less intense. They brought up the ER doctor, who concurred with the OB on call, that Allison should have a c-section. Her bedside manner was considerably better though she allowed Allison to negotiate terms for leaving the hospital without a c-section. If she was dilated less than e centimeters, she would not have her sign a paper that she was leaving Against Medical Advice (AMA). Miraculously, when the doctor checked her, she told her she was dilated 2 centimeters and was "paper thin."

So, they were "homeless." They didn't know where to go. Who would attend her birth with two c-sections under her belt, so to speak? They called a midwife that we all know and love, but without ever seeing her, the midwife didn't want to take that on. They called a well-known VBAC doctor in the area, but an hour from their home, and could not reach him. They simply drove home, with Allison in labor.

They spent days trying and wishing for labor to start, and now they were trying to get labor to stop! Allison's doctor would be back in the office the next afternoon, and this was midnight. Labor continued and got much stronger once they were out of the hospital.

As labor progressed, they made the very difficult decision to go to the hospital closest to their home, knowing they would have a c-section, no matter where they went. They wanted to have monitoring for both mom and baby and staying at home was no longer an option. When she got to the hospital, she was dilated 5 centimeters and 100% effaced. Baby was fine, mom was fine, and labor was normal. But because she had had two previous c-sections, she had a third.

Baby was about 9 1/2 pounds and very healthy. A wonderful nurser, too! They are so happy that they started labor on their own and that baby, and mom, had the benefits of labor. Her recovery has been the best of all the c-sections, and she feels that it is due, in part because of the chiropractic care she received and continues to receive.

She will reflect on this experience all her life. She did tell me that the pregnancy was better than what it would have been because she had hope -- hope for a vaginal birth. She prepared for a different experience, and while the outcome was not what she hoped for, she went through the pregnancy with a different attitude than she would have if she had just scheduled another c-section.

I have thought about this so much, and I don't know what she could have done differently. The whole experience was circumstantial. If her doctor would have been there, or one of the other doctors who support VBACs had been on call, would she have had a vaginal birth? Probably. This story illustrates the point that birth is often about policies and lawsuits, not about good health care. Allison had this c-section simply because the hospital, and the on-call doctor, had a no-VBAC policy.

The system is what failed Allison, not her body.
Posted by Donna Ryan at 8:35 PM 5 comments: Links to this post

More Evidence About the Dangers of Ultrasound

I found a link about some other studies on ultrasound. There are a couple of posts under this link. They are short and easy to understand. The evidence is compelling. Check it out.

Next time your doctor says, "I don't know why 'Bradley' is so concerned about ultrasound," and tries to tell you how safe it is and that Bradley Instructors are the only people out there who care, they couldn't be further from the truth.

Evidence is mounting. Check it out.
Posted by Donna Ryan at 7:18 PM No comments: Links to this post